In mid-January, Gene Gelgelu made a down payment on a building along Snelling Avenue in St. Paul, Minnesota, accomplishing two goals: combating gentrification in the increasingly popular Hamline-Midway neighborhood and laying the first steps of what will become the Little Africa Market and Food Business Incubator. Gelgelu had been dreaming of starting the incubator for some time, but financing was a challenge—until just recently.

Gelgelu’s African Economic Development Solutions (AEDS)—a nonprofit dedicated to building wealth in African immigrant communities—is one of the 20 organizations from around the country that received a total of $3 million in grant money from the Healthy Food Financing Initiative (HFFI) in December. Earmarked from the 2014 Farm Bill and executed in partnership with the Reinvestment Fund, the U.S. Department of Agriculture (USDA) program is designed to support projects that improve access to fresh and healthy food through retail. 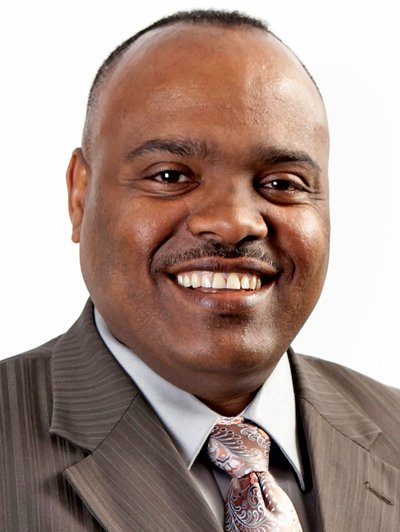 Gelgelu and AEDS applied to the program late last summer and found out they would be getting the $200,000 award this fall. Purchasing the nearly 8,200-square-foot building was the first step in developing what will become a Pan-African immigrant cooperative market.

Although the food incubator is still in its earliest stages, the vision for the space is a home for everything from food retail to a commercial kitchen and bakery below a new office headquarters, community meeting spaces, and a museum for African immigrant art.

The effort is fitting, as the Twin Cities’ African immigrant population has grown from roughly 35,000 in 2000 to over 90,000 in 2018. Minnesota is home to the nation’s largest Somali community, many of whom are concentrated in the two cities. Minneapolis boasts a Little Mogadishu in its Cedar-Riverside neighborhood, which Representative Ilhan Omar, a Somali-American, called home.

However, Minnesota and the Twin Cities in particular are often seen as deeply inequitable places, where people of color experience gaping disparities across income, employment, education, and poverty levels compared to their white counterparts. Food access, of course, falls along the same lines, with 43 percent of African Americans experiencing food insecurity compared to 10 percent of white people, according to a 2019 survey.

Gelgelu hopes that the Little Africa Market and the building AEDS has now acquired for it will help address these challenges. “Finding this place played a critical role in helping us to even think of the possibilities of a co-op and a museum and an office,” Gelgelu says.

Community engagement will be key in defining what the pan-African food incubator will eventually look like, but the hope is to bring together a diverse selection of food production and other projects in one place. “How can we provide a space where [people] can learn from each other and share their culture?” Gelgelu says. “I think that’s really what inspired us.”

Gelgelu—an Ethiopian immigrant, 2017 Bush Fellow, and former operations analyst for the State of Minnesota—started AEDS at an almost unimaginably trying time, after the 2008 housing bubble collapse. “It was difficult for a nonprofit to start—for any business to start, but especially a nonprofit—but that’s when we started. And our mission was and still is wealth-building.”

AEDS focuses largely on business development and homeownership as the central ways to move people in African immigrant communities out of poverty. 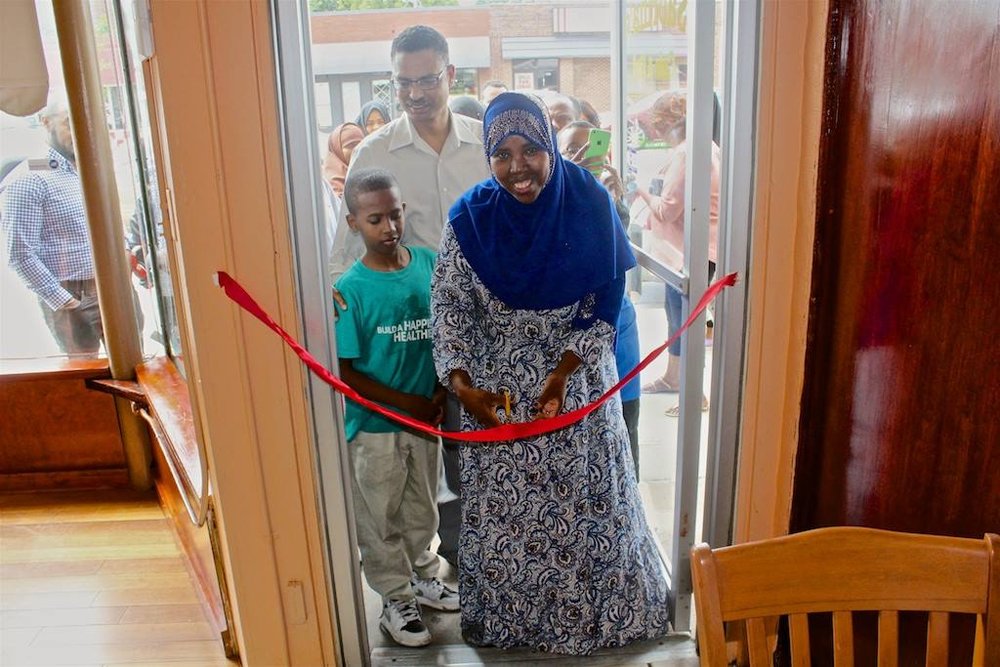 Ribbon-cutting at Sabrina’s Cafe and Deli in St. Paul. (Photo courtesy of AEDS)

In 2015, the organization partnered with Bruce Corrie, an economics professor at St. Paul’s Concordia University, on a report titled “The Economic Potential of African Immigrants in Minnesota.” Corrie’s work found that 67 percent of African immigrant business owners identified securing a loan as a major obstacle to forming a business. He also found that African immigrant communities bring in nearly $2 billion in annual income and valued the African products markets at $281 million across the state.

“The wealth gap . . . exists because if you don’t have loans or financing, it’s difficult to sustain a business. They’re capital starved,” Gelgelu says of Minnesota’s African immigrant community. “This is why we needed to start our own lending program to fill that gap.”

That’s exactly what AEDS does—and then some. The organization offers a 12-week training program to help community members start or expand businesses as well as access to pro bono attorneys, microlending, homebuyer education, and financial education. In 2020 alone, AEDS served more than 1,000 people, including 100 participants in the homebuyer program, the majority of whom Gelgelu expects have bought a home as a result.

The Funding That Made It Possible

“[HFFI] came here when we needed the funding at a critical time,” Gelgelu says.

HFFI started in Pennsylvania in 2004 as a partnership between the state’s department of community and economic development and the Food Trust, a national food access nonprofit headquartered in Philadelphia, to provide investment in underserved areas. That program grew into a national campaign that finally took shape during former President Obama’s first term and made its first grants in 2018.

“The grants we offer are really about implementation and capital that’s needed” for one-time expenses, says Molly Hartman, HFFI’s program director. “A lot of the grants are being used for equipment, buildout and, in some cases, initial operating expenses,” she says, noting that HFFI also offers technical assistance for programs that are still in the planning phase.

While the Little African Market’s African immigrant focus stands out from the crowd, several other HFFI grantees are focusing on economic development. The California Indian Traditional Food Incubator in Santa Rosa is providing technical assistance to young people who are starting food businesses. The Fresh Start Farms Food Hub in Manchester, New Hampshire, is an economic-support organization that will be updating its mobile market and open a retail site for corner stores. The Jeffcoat’s Family Market in Marks, Mississippi, is opening a full-service grocery store in the rural Mississippi Delta that is expected to bring jobs and economic development with it.

The idea for AEDS to do food-related work has been in development for some time, Gelgelu says, but the feasibility and the urgency didn’t truly emerge until after the pandemic hit and civil unrest followed the murder of George Floyd, Gelgelu says.

As a result of the damage and destruction that coalesced in St. Paul during the rioting and looting that coincided with the peaceful protests, many immigrant food businesses couldn’t afford the costs associated with rebuilding in a rapidly gentrifying neighborhood.

“The gentrification of the building next to us,” he says of businesses like Bolé Ethiopian Cuisine, “inspired us to [buy] a building in order to mitigate the displacement and gentrification.”

Preparing for the Long Haul

Though the HFFI grant covered the building’s down payment, it’s not clear how AEDS will be funded in the future.

As Hartman sees it: “[Some of] these models will need subsidies for a long time, or forever in some situations.” David Hughes, an agribusiness development professor at the University of Tennessee, agrees. Food incubators similar to AEDS’s can be found nationwide, including Salt Lake City’s Spice Kitchen incubator, which serves refugee communities; Brooklyn’s Hot Bread Kitchen, which serves a range of individuals impacted by inequality; and Chicago’s Forty Acres Fresh (another HFFI grantee) on the city’s largely Black and immigrant west side—but many struggle to find financial stability over time.

Hughes describes grants like HFFI’s as “great at helping people get off the ground and help continue operations,” he says. “It’s good start-up money, but, ultimately, you’re on your own. It doesn’t mean that you can’t find permanency in local government money or local or regional foundations if you are perceived as doing enough that’s beneficial to the community. But you might be at the mercy of the market [in terms of] what revenue is coming through the door.”

Gelgelu, however, is undeterred. “That’s part of the adventure,” he says of the project that is also being funded through a line of credit. He’s used to thinking constantly about ways reduce costs, whether that’s through shared equipment or a floating cashier that all vendors in the building will utilize through a shared barcode system.

In the meantime, though, getting the building renovated to meet code is immediate next step, as is bringing on a full-time project manager to usher the vision into reality.

Ultimately, for Gelgelu, the market will be an important piece of the puzzle when it comes to addressing the wealth gap. “To sustain ourselves, to survive as humans, wealth-building is our mission in developing a sustainable [immigrant] community.”

This article appeared in Civil Eats on February 24, 2021.