The Museum Building an Incubator for Native Food Businesses

The California Indian Museum and Cultural Center is using a significant USDA grant to reconnect these tribal community members to traditional knowledge and practices, including foodways.

Grown by farmers with The Cultural Conservancy, Seneca Onëo white corn is braided for drying prior to shelling for seed and grinding for flour. Photo by Mateo Hinojosa, TCC

icole Lim’s memories of visiting her grandmother’s house as a child often center on food.

“The table always had food on it,” says Lim, who is the executive director of the California Indian Museum and Cultural Center (CIMCC) in Santa Rosa, an hour north of San Francisco. “She could make anything taste good.”

Lim is Pomo and Miwok, tribes that once subsisted on acorns, berries, deer, and abalone in what is now Northern California, from the Sonoma coast to the oak-shaded woodlands that surround the Clear Lake basin. But after two centuries of displacement and assimilation efforts, the tribes have been largely disconnected from their traditional foodways.

The three counties where CIMCC operates—Sonoma, Lake, and Mendocino—are home to 24 tribes and more than 23,000 Native people. Since 1996, the museum has worked to reconnect these tribal community members to traditional knowledge and practices, including foodways. The nonprofit offers several food-focused programs, including a youth-led project to create a healthy snack food made of acorns. The resulting product, known as Acorn Bites, is sold at the museum store and local farmers’ markets.

The organization’s efforts are in line with the growing movement among pre-American tribes to reclaim access and control over their ancestral foodways. Now, the museum is on the verge of expanding its food work. In December, it received a $180,000 grant from the U.S. Department of Agriculture’s Healthy Food Financing Initiative, a federal program designed to provide “resources to healthy food retail and food enterprise projects to overcome the higher costs and initial barriers to serving low-access areas.”

The organization will use the grant to transform an existing warehouse space at the museum into a food hub that will house its food sovereignty programs and a new incubator for Native-led food startups. The museum will outfit the 5,000-square-foot space with commercial kitchen equipment, including a dehydrator for drying acorns or jerky and a freeze dryer for preserving berries and other ingredients.

A group of Native youth participate in a cooking class hosted by the CIMCC, in a photo taken prior to the pandemic.

Lim hopes to support local Native food vendors by providing not only space and equipment but also business development resources that will help them grow. CIMCC staff members, several of whom started with the museum as part of its Tribal Youth Ambassadors program, have identified a handful of cottage-food producers that offer traditional staples such as acorn flour, dried seaweed, and jerky. While these startups may become part of the incubator once it gets underway, Lim had expected to find more potential candidates for the program. The region’s lack of Native-led food businesses is a problem she hopes to address via the food hub.

“The idea is not only to support the few existing producers in the region, but to create opportunities for new producers to emerge,” she says.

The museum’s search for potential candidates led them as far as Fresno County, more than 200 miles to the south, where Arrow’s Native Foods is reviving a traditional dish known as acorn mush. First launched as an Indian taco booth at powwows on the Big Sandy Ranchería northeast of Fresno, the small, family-owned business provides acorn mush and other traditional foods at tribal events and ceremonies throughout the San Joaquin Valley and in other areas of the state.

The mush is made from a mixture of acorn meal and water that is heated before cooling, at which point it congeals into a consistency between pudding and jello, says co-owner Arrow Sample. Given its lack of availability in recent decades, Sample says the one-time staple food is especially popular with tribal elders.

“Seeing the elders’ satisfaction makes me know I’m doing something right,” says Sample, who is a member of the Big Sandy band of Western Mono Indians. “We’re protecting what’s always been ours and trying to find a place in our modern-day lives to incorporate that into our diets.”

Sample, who leads the business alongside his fiancée, Rochelle Bonillas, says he would be eager to participate in the CIMCC incubator program, which would serve as a “resource center” for his and other Native-led businesses while providing a much-needed physical location for processing their products.

The museum is well aware of the challenges associated with being a local producer. In its ongoing efforts to produce and market Acorn Bites, for example, the museum’s staff and tribal youth ambassadors faced difficulties in sourcing acorn flour and encountered steep fees for space at local farmers’ markets. Lim says the incubator program will pave the way for more Native-led businesses to access the markets, while increasing the local supply of acorn flour and other ingredients. 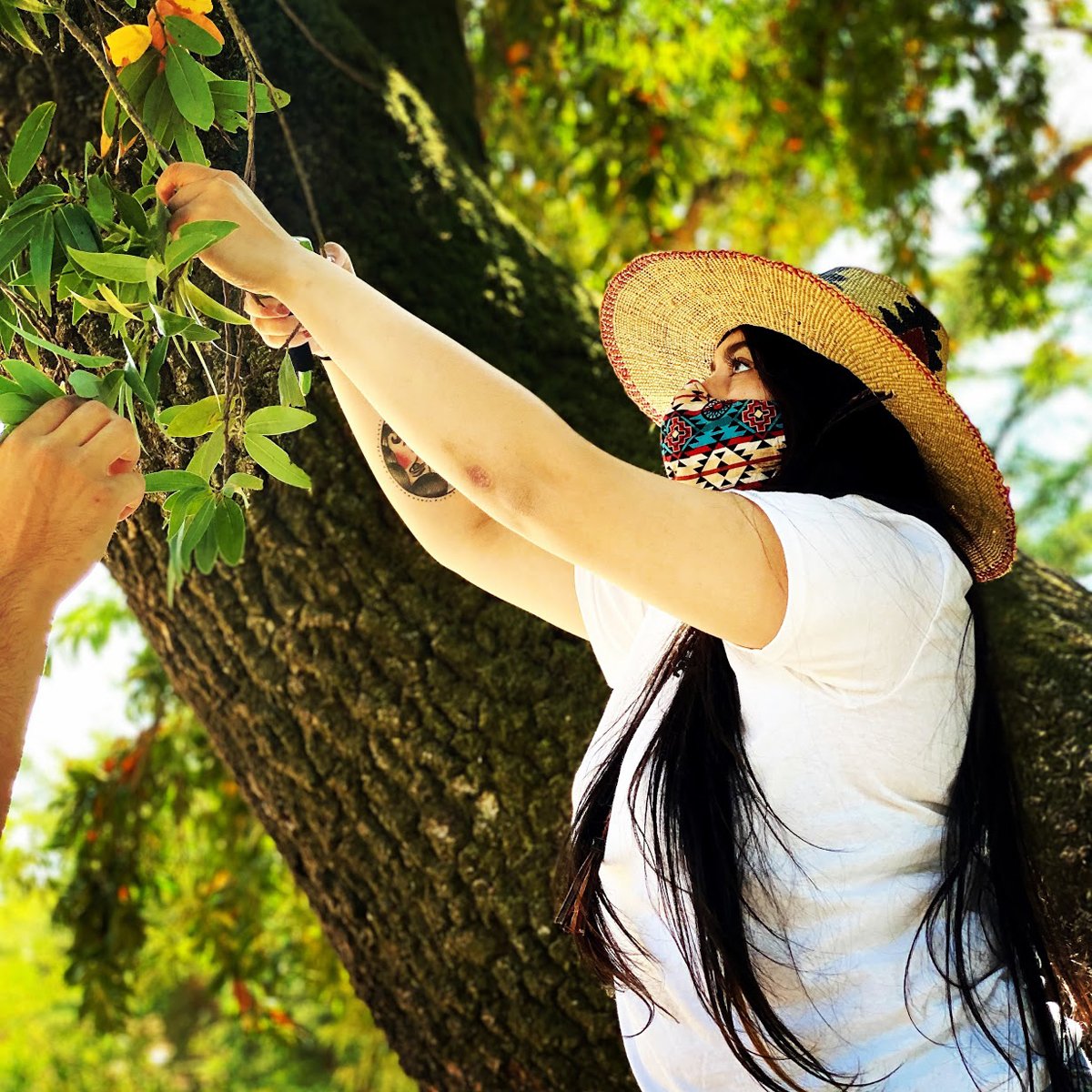 Viviana, one of the CIMCC’s Tribal Youth Ambassadors, gathers peppernuts from a California bay laurel. During the pandemic, the museum was forced to limit its in-person meetings to a small number of outdoor gatherings. (Photo by Laura Mendoza)

And while the incubator’s intent will be to support Indigenous food makers, Lim says the project will also further two of the museum’s primary objectives: passing along traditional knowledge and practices, and making traditional foods more accessible.

“We want to make sure we have a venue that nurtures [the community’s] knowledge base but also fosters creativity, because we have some amazing tribal chefs who do such out-of-the-box things with our traditional ingredients.” That could include giving modern foods a twist, such as an acorn-based miso, Lim says, or using Indigenous ingredients to create novel types of breads or stews.

Responding to the Pandemic

The museum’s classes and cooking demonstrations by local chefs and educators have been put on hold during the pandemic. Despite Lim’s initial reluctance to broadcast cultural knowledge in a digital space—which, she was concerned, could lead to cultural appropriation—CIMCC went virtual in the early days of the pandemic.

“Sometimes that meant staff had to mask up and go to an elder’s home to hook up a camera to ensure they could participate, but after a few months we were able to get everybody online and on board,” she says, adding that she expects to continue offering virtual events in the future.

Indigenous food writer Sara Calvosa Olson led multiple virtual classes. In one session she taught participants how to prepare an acorn-based miso soup featuring a broth made with locally harvested seaweed. Pomo artist Meyo Marrufo has also taught tribal youth how to make a sort of cider out of manzanita berries, which, she warns, have seeds that must be removed, since they can be toxic if ingested in large quantities.

Marrufo has also led demonstrations involving basket weaving, doll making, and acorn processing using traditional tools and methods. “The goal of the classes is not to show Indians how to be Indian,” Marrufo says. “The goal is to help people understand what we have, and to pass on our traditions.”

To bolster food security among local families during the height of the pandemic, the museum also partnered with the Cultural Conservancy to distribute food boxes of locally grown produce. The Bay Area-based, Native-led nonprofit owns a seven-acre farm in Sonoma County, where team members grow heirloom varieties of corn, chiles, and beans as part of its own efforts to revitalize Native food systems, says farm manager Maya Harjo. 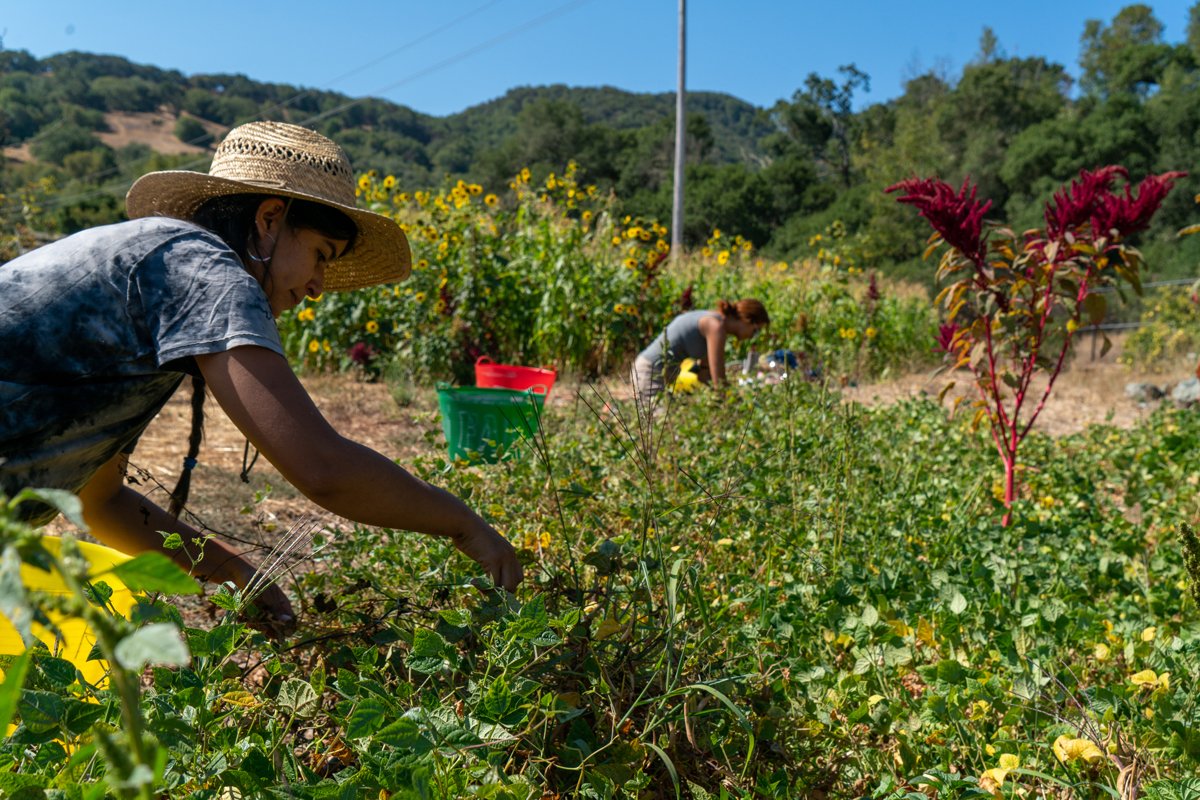 Over the course of last year’s growing season, CIMCC distributed nearly 2,000 pounds of produce in partnership with the organization, says Harjo, who belongs to the Quapaw, Muscogee Creek, Shawnee, and Seminole tribes. The organizations plan to resume the food distribution program in the coming weeks, as local farms begin harvesting this season’s crops, Lim says.

For the museum, the food boxes represent a larger effort to build resilience within the tribal community. Lim says the food hub concept evolved from an effort to equip the museum facilities with solar-powered backup batteries and improved ventilation systems so the building could serve as a “resilience hub” for community members during natural disasters, such as wildfires. As part of the planning process, a number of tribal community members noted that efforts to increase tribal independence and resilience should also focus on food sovereignty.

A Source for Healing

Beyond resilience and food sovereignty, gathering around traditional foods has restorative power for tribal communities, whether it’s to cope with wildfire-related evacuations or the generational trauma stemming from persistent marginalization and history marked by state-sanctioned violence, says Nicole Lim’s daughter, Jayden.

During the California Gold Rush, for instance, thousands of Native people were kidnapped, enslaved, and murdered by non-Native miners and militias. In one of the most painful episodes in Pomo history, the U.S. Cavalry killed up to 200 Pomo women, children, and men in 1850 in what is known as the Bloody Island Massacre.

Jayden Lim says that history of violence and forced assimilation makes it all the more important for California’s tribes to reconnect to their traditional foodways.

“Food is our culture, and culture heals,” says Jayden, a college sophomore and active participant in several CIMCC initiatives. “So food is really instrumental in our process of healing from the atrocities that our government committed against us and the injustice that our communities still face today.” 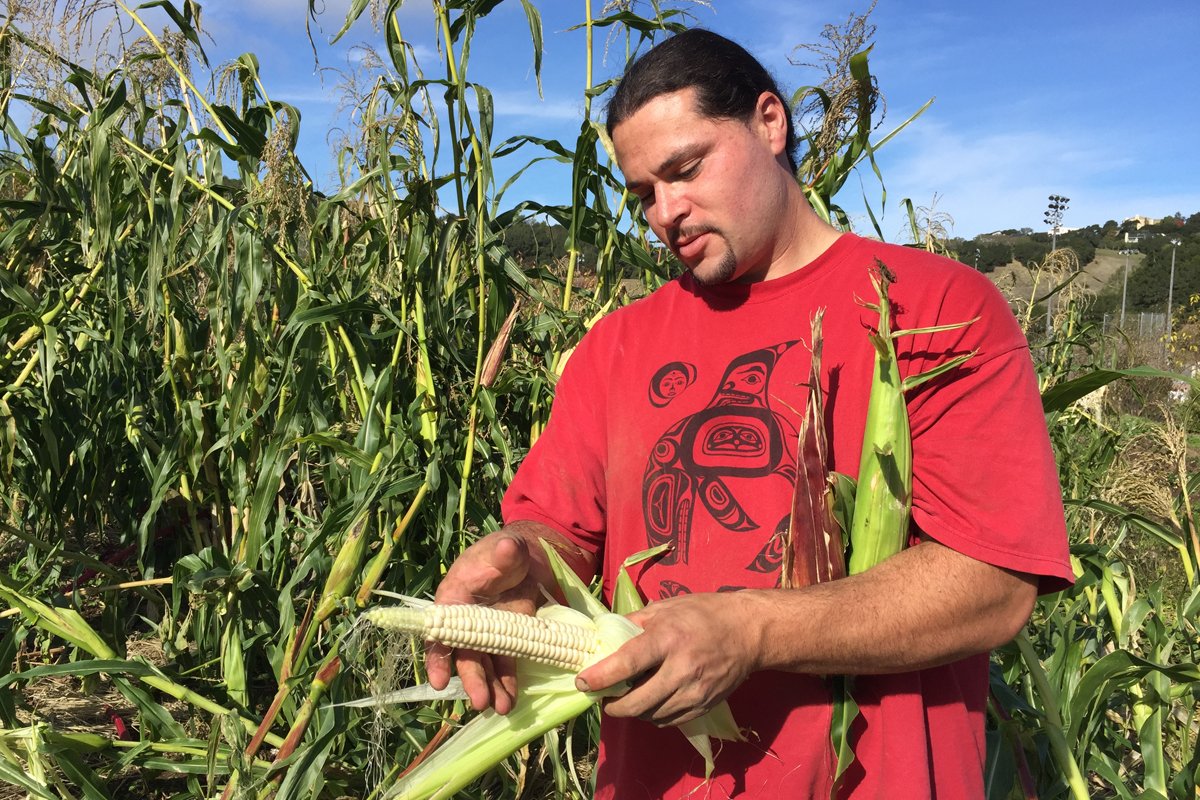 Jayden—like many of her fellow Indigenous activists—considers the simple act of reconnecting with traditional foodways to be a form of resistance. “It was hammered into our ancestors that it’s really bad to be Indian, so by learning about and reclaiming these foods, we’re resisting that assimilation,” she adds. “We make it a good day to be Indian again.”

The hunting and gathering practices of the Pomo, Miwok, and other tribes in the region were interrupted by the “consistent intrusion” into their ancestral lands by others, which tied up vast tracts of their territory into private and government-owned property, says A-dae Briones, director of native agriculture and food systems programs with the First Nations Development Institute, a Colorado-based organization that provides economic support for Native American communities. Since the tribes’ survival was directly tied to the ecological health of the area, reconnecting with traditional practices would benefit both the people and the environment, she adds.

“The tribes have maintained and stewarded these lands for thousands of years, and so these lands have become accustomed to Indigenous land stewardship practices that have only been disrupted in the last 100 years,” Briones says. “In the absence of traditional stewardship, we see a lot of invasive species coming in, soil and water quality being degraded, and the build-up of debris that could lead to bigger fires.”

Briones says tribal food sovereignty programs like the museum’s are an essential tool in reconnecting Native communities to their ancestral lands—particularly programs that target youth education. And while Briones understands why many indigenous rights advocates—especially younger activists—view food sovereignty efforts as an act of resistance, she sees it as a continuation of the old ways.

“This is who Indigenous people have always been; we’ve been acorn-eaters, we’ve been deer-eaters. So it’s really important to maintain those practices, despite the more recent introduction of Western education systems,” she says. “We’re just practicing who we are.”